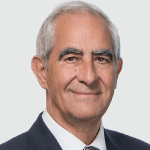 Sir Keith O’Nions commenced as the Chair of the BGS Board in 2018. He was previously President and Rector of Imperial College London from 2010 to 2014.

Sir Keith has participated in a broad range of academic and technological committees and served on the Board of the Natural History Museum from 1995 to 2005 (Chair from 2002) and the Council of Science and Technology from 1998 to 2000.

He served on the Board of A*Star, Singapore from 2013 to 2021,was Chair of Cambridge Enterprise from 2014 to 2020 and is currently Chair of Council, University of Nottingham.

Sir Keith was knighted for services to earth sciences in the 1999 Queen’s Birthday Honours.