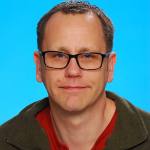 Robert Cuss gained a B.Sc. with first class honours in Geophysics (Geology) from the University of Liverpool in 1995. He then moved to the Rock Deformation Laboratory at Manchester University to study brittle deformation around scaled boreholes in sandstone. This work was funded by British Gas (later BG plc) and was supervised by Professor Ernie Rutter. Robert Cuss was awarded the Degree of Doctor of Philosophy in 1999. He then moved to the British Geological Survey to work in the Regional Geophysics Group, which included several workers specializing in borehole geophysics as well as potential-field geophysicists. During his 17 years at BGS he has worked on a wide range of activities; specialising in applying rock mechanics to a range of industrial sectors, including radioactive waste disposal, CO2 sequestration, shale gas, hydrocarbon sealing, underground gas storage, hydrogeology and engineering geology. He currently runs the Fracture Physics Laboratory, with close links to the Transport Properties Research Laboratory. Research interests include fluid movement through low permeability media with emphasis on fracture flow