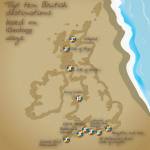 Professional and budding geologists across the UK are heading to the coast this summer hoping to do a bit of rock spotting alongside sunbathing and building sandcastles with their kids. Armed with the latest version of the popular geology app, iGeology, they will be able to identify exactly what rocks they are looking at and get the full information on the geology from the databanks at the BGS.

Since its launch in late 2010, the BGS iGeology app has been downloaded over 285 000 times. This free app can access all of the BGS’s 1:50 000 geological maps on a smart phone or tablet. Using the inbuilt GPS, the app locates where you are and displays the geology underneath your feet.

The iGeology app works in the same way as Google Earth: it only sends the data you need on demand (otherwise it would not fit onto your phone). No personal details are kept but, the BGS can work out the most popular areas of the UK where people are interested in the geology under their feet.

Unsurprisingly the top ten locations are the largest cities in the UK, as most people want to know about the geology where they live. But looking beyond this, the BGS can also identify those areas that are likely to be holiday destinations for geologists. This has resulted in our top ten coastal destinations list.

The chalk cliffs and the corresponding outcrops inland have attracted much attention over the centuries because of their high fossil content. One of the most significant fossil finds was the discovery of the fossil skeleton and teeth of an Iguanodon, a Cretaceous dinosaur, by Gideon Mantell in 1822. Due to the incompleteness of the first fossil discoveries, Mantell initially placed what he thought was a horn on the nose of the dinosaur. Later discoveries in later years revealed that the horn was in actual fact a modified thumb.

Known as the gateway to the north-west Highlands UNESCO Global Geopark, Ullapool is a great place to begin looking for some of the oldest rocks in Europe, the Lewisian gneisses (three billion years old). It is also only a short journey from the Moine Thrust, where older rocks are pushed up and over younger rocks and widely regarded as the most significant crustal dislocation of its type in north-west Europe.

Lulworth Cove is arguably one of the most-visited geological localities in the UK. The rocks exposed provide a continuous sequence covering 80 million years of Earth history from the Jurassic to the Cretaceous Periods. They include a variety of rock types and structures such as the contorted Lulworth Crumple and Stair Hole. The geomorphology is also worth mentioning, with caves, arches and stacks all present, making this one of the best natural training grounds for geologists from all over the world.

Lyme Regis is one of the best known locations in the UK for fossil collecting and is part of the Dorset and East Devon Coast World Heritage Site, more commonly known as the Jurassic Coast. One of the most famous fossil collectors from the town was Mary Anning, whose discoveries of Jurassic marine fossils in the 19th century were some of the most significant of all time. Her discoveries included the first correctly identified Ichthyosaur skeleton, the first two plesiosaur fossils ever found, and she played an important role in discovering that coprolites were fossil poo!

5. The Isle of Skye, Highland

The Isle of Skye has some of the most unique landscapes in Europe, all of which are a direct result of the complex geology created by a wide variety of natural processes over many millions of years. Ranging from some of the UK’s oldest rocks in the south-east to the solidified volcanic lavas at the Cuillin, and the dynamic cliffs at the Storr to the dinosaur footprints at the beach at Staffin, the Isle of Skye has it all for intrepid rock hounds.

The geology of the Isle of Wight is mostly made up of layers of sedimentary rock, many of which are Cretaceous in age and deposited in a range of environments. The oldest Cretaceous rocks (125 to 100 million years old) are sandstones and mudstones that formed in rivers and floodplains and contain a number of dinosaur fossils. The next rocks that formed and the ones found at St Catharine’s Point are mainly sandstone and marine clays that formed between 110 and 100 million years ago in an ancient tropical sea. Finally, and perhaps the most famous rock from the Isle of Wight is the Cretaceous chalk (100 to 65 million years ago) formed from billions of tiny marine organisms that thrived in a clear warm sea.

The rocks at Oddicombe Beach in Babbacombe Bay are breccias of Permian age (280 to 300 million years old). A term used to describe a rock made up of broken fragments of rock cemented together by a fine grained matrix, the breccia formed during periods of flash flooding when large volumes of material were carried from the adjacent uplands by ephemeral streams before being deposited when they reached low lying areas.

9. The Isle of Arran, North Ayrshire

The Isle of Arran is famous amongst geologists as being one of the sites that Hutton’s Unconformity can be seen (the most famous other site is at Siccar Point in Berwickshire). Whilst visiting Lochranza in 1787, the geologist James Hutton noticed that the layers of rocks at the bottom of the sequence were nearly vertical whilst the overlying rocks were almost horizontal. He made the assumption that the lower rocks had been tilted and then eroded before the upper rocks were deposited. Evidence gathered here and at other sites helped Hutton to prove that the two different rock formations were formed at different times and went on to contribute to his theory on the age of the Earth.

Conwy lends its name to the Conwy Rhyolite Formation, made up predominantly of rhyolite lavas that formed during the Ordovician period (between 450 and 460 million years ago). Rhyolite is the extrusive (or volcanic) equivalent of granite and usually forms as highly viscous and often extremely explosive lava. One of the best ways of seeing this rock is by exploring the Conwy town walls; these unusually well-preserved walls are mostly of sandstone and limestone, but additional sections in the upper part of the eastern walls are made of rhyolite.