In September 2017, one of the largest geomagnetic storms of the current solar cycle hit the Earth after a coronal mass ejection left the Sun. 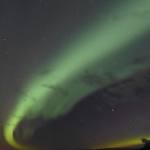 In September 2017, one of the largest geomagnetic storms of the current solar cycle hit the Earth. A coronal mass ejection left the Sun at midday on 6 September and crossed space in around 36 hours. Starting around 23:30 on 7 September, the first and deepest part of the storm lasted for around three hours. Beautiful aurorae were visible all across the UK. Around 13:00 on 8 September a second burst arrived, though as it was during the day in the UK, the aurorae were not visible. They were, however, detected by the newly installed BGS schools magnetometer network.

Since 2015, BGS and Lancaster University have been working on an STFC Small Public Engagement Grant to build and install 10 Raspberry Pi magnetometers. These are relatively small and cheap sensors that are installed in schools across the UK. During the storm they measured the change of the magnetic field in the north, east and downward directions. The north (or X) direction is most sensitive to the aurora.

Figure 1 shows all the data collected for the storm. The map shows the location of the scientific observatories (INTERMAGNET), the BGS and Lancaster University network of variometers and a new network in Ireland run by Trinity College Dublin and data from the Tromsø Geophysical Observatory network. The line plots show the change of the magnetic field over the three days from 7–9 September 2017. The measurements are arranged by latitude. The first and second parts of the storm are clearly visible as large spikes, decreasing in intensity further south. This is the signature of the auroral oval moving south during the peak of the storm, then returning northwards.

The line plot data were turned into a map of the magnetic field variation across the UK for each minute. At around 23:30 UT the aurora moves southward across the UK (left panel). Several more bursts of activity can be seen later in the day from 12:00 to 18:00 UT.

Without the new magnetometers, it would not be possible to see such detail. These measurements will lead to new understanding about how the magnetic field changes over regions smaller than 1000 km, such as the UK, during large geomagnetic storms. 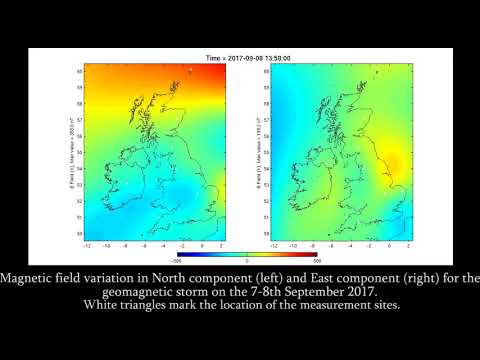 Video of the geomagnetic storm.

We wish to thank the STFC for the funding to create and disseminate the instruments and to the various host schools and institutions who provided the data. Data are freely available here.