The OGC GeoSciML Standard defines a model and the encoding for geological features commonly described and portrayed in geological maps, cross sections, geological reports and databases. 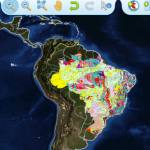 On 15 March 2017 the Open Geospatial Consortium (OGC®) announced that GeoSciML was approved and published with full documentation as an OGC Standard. The OGC GeoSciML Standard defines a model and the encoding for geological features commonly described and portrayed in geological maps, cross sections, geological reports and databases.

GeoSciML provides a mechanism for storage and exchange of a broad range of geological data, enabling users to generate geological depictions (such as maps) in a consistent and repeatable fashion.

The GeoSciML Standard includes a ‘Lite’ model, used for simple, map-based applications; a basic model, aligned with INSPIRE, for basic data exchange, and an extended model to address more complex scenarios. The standard also provides patterns, profiles (most notably of OGC Observations and Measurements and ISO 19 156) and best practices to deal with common geoscience use cases.

The model was developed by the International Union of Geological Sciences (IUGS)’s Commission for the Management and Application of Geoscience Information (CGI) and version 4.1 is the first version officially submitted as an OGC Standard. This standard describes a logical model and GML/XML encoding rules for geological map data, geological time scales, boreholes and metadata for laboratory analyses.

Earlier versions of GeoSciML have been used for several years by geological data-sharing projects around the world when GeoSciML was only an IUGS standard. These include OneGeology, INSPIRE, the US Geoscience Information Network (USGIN) and the Australian AuScope and AusGIN projects.

Having GeoSciML version 4 ratified as an official OGC Standard is a huge step forward for GeoSciML, particularly to reassure application developers that GeoSciML is the way forward for geoscience data transfer. The collaboration of the previous IUGS GeoSciML working group and OGC has been a great example of effective cooperation between standards organisations.

Maria Glícia da Nóbrega Coutinho, the Head of the International Affairs Office of the Geological Survey of Brazil (CPRM) and OneGeology board representative for South America said:

The formal documentation and approval of the GeoSciML 4.1 standards by OGC allow us to expand the exchange of highly interoperable geoscience data throughout the South American continent with the support of the OneGeology standards support network, and allowed us to achieve the maximum five stars of OneGeology interoperability.

CPRM publishes its GeoSciML-conformant web services to the OneGeology portal.

BGS Edinburgh hosted the first meeting of the IUGS-CGI GeoSciML design group in 2003 and has been heavily involved with its development and testing since then, including helping with the final documentation for OGC. BGS administers and provides global web services support to the OneGeology initiative.