Researchers have warned of the presence of toxic contaminants and untreated wastes accumulating in Nairobi’s Mathare, Ngong and Nairobi rivers. 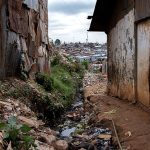 More than half the population of Kenya’s capital, Nairobi, live in extremely poor conditions in informal settlements. In January 2020, researchers collected samples of mud sediment from the rivers in areas where five of Nairobi’s biggest and most congested informal neighbourhoods are located on the rivers’ banks.

Scientists at BGS and Nairobi University found that toxicity is highest in these regions of Nairobi and have expressed concern that pollution found within river sediments poses a dangerous health risk to local communities and the environment. The researchers identified multiple groups of organic contaminants and high levels of untreated sewage and faecal matter that together pose a threat to ecological and human health.

The study and its findings

The study, Impact of organic pollutants from urban slum informal settlements on sustainable development goals and river sediment quality, Nairobi, Kenya, Africa, was recently published in the journal Applied Geochemistry. It established that the main sources of toxicity originate from high levels of untreated human and domestic waste, as well as background urban and industrial sources including small businesses, power stations and vehicles.

This may not seem surprising, given that pollution within Kenya’s informal settlements is both visually apparent and frequently cited as an issue.

However, prior to this study, very little was known about the complex chemical mixtures of persistent organic pollutants in river sediments receiving wastes from these areas of Nairobi and the repercussions for ecology and human health.

Contaminants found in most of the samples include:

The most polluted sediments were from Kiambio, Mathare, Kawangware and Kibera settlements, which also demonstrated the highest levels of toxicity, whereas those from Mukuru were less toxic. The high pollution levels at Mathare is expected because it is one of the closest informal settlements to Nairobi city centre, with a population of over 200,000 people.

The researchers also explain that only a few studies of contaminants and pharmaceuticals in Kenyan rivers are available and mainly focus on water samples rather than sediments. Sediments are less predictable as they can act like an urban sink, collecting and harbouring potentially dangerous and toxic contaminants over time, only for them to be released into the environment when the sediment is later disturbed — often by human activity.

The presence of high concentrations of untreated sewage found in the sediment is of concern because faecal matter at such high levels can encourage growth of bacterial and viral pathogens that, if ingested by humans, can lead to a range of potentially life-threatening diseases. It also promotes the growth of toxic algal blooms, which can lead to dangerous ecosystem instability. This is a growing concern as it can encourage pests and pathogens and cause much stress to the environment, individuals and communities already living in poor conditions.

The prevalence of pharmaceuticals in urban waste waters can also cause significant health risks when they enter the environment, increasing antimicrobial resistance.

Most of the samples contained TEH, PAHs, PCBs, DDT and pharmaceuticals; the most dominant traces of analgesics and anti-inflammatories were acetaminophen (paracetamol), diclofenac and ibuprofen. Their prevalence in urban waste waters can cause significant health risks when they enter the environment, for example by increasing antimicrobial resistance.

Trace metals, although present, were generally found to be at lower concentration levels. However, researchers conclude that both local metal-working activities, such as soldering, and residual persistent lead from petrol associated with vehicle activity do contribute to the cocktail of pollution accumulating within the sediments.

It is hoped that this more detailed assessment of sediment quality in informal settlements will help to support understanding of the current challenges and regulatory requirements to reduce pollution and contamination in Nairobi. Researchers say the study is of particular importance to inform future monitoring efforts because it establishes an important baseline by which progress can be assessed towards the United Nations Sustainable Development Goals (SDGs).

The SDGs set out, amongst other aims, to eradicate global poverty and facilitate sustained and inclusive economic growth, social development and environment protection by 2030. They include several ambitions to improve waste management, reduce pollution and contamination of all types, and protect health and well-being — goals that are also reflected in Kenya’s Vision 2030.

Kenya’s Vision 2030 aims to ‘transform Kenya into a newly industrialising, middle-income country providing a high quality of life to all its citizens by 2030 in a clean and secure environment.’ In one priority, it highlights the need to reduce pollution and improve sanitation and waste management to achieve these ambitions.

We can demonstrate that there is a marked link between sediment quality and the UN’s Sustainable Development Goals for health and well-being, clean water and sanitation, sustainable cities, responsible consumption and production.

We need more studies like this to establish a baseline understanding of sediment and soil quality in informal settlements in Kenya. These are essential to understanding the health, infrastructural and urban planning challenges that must be addressed if the ambitions of the SDGs and Vision 2030 are to be realised.

The importance of soil and sediment assessments are largely going unnoticed. United Nations initiatives such as the New Urban Agenda, adopted at the Habitat III Summit in 2016, make no reference to soil, sediment or land pollution and contamination, even where they make reference to environmentally sustainable and resilient urban development. The researchers stress that this characterisation of sediment pollution in particular in Nairobi demonstrates the need to think beyond air pollution when planning, delivering and monitoring progress towards sustainable urban development.