Shale gas deposits are regarded as commercially exploitable when the organic matter contained within the shale is of the right type — of marine origin — the net shale thickness exceeds 25 m and when it is found at a depth of more than 1500 m.

Where is shale gas found in the UK?

In the UK, four areas have been identified as potentially viable for the commercial extraction of shale gas:

Between 2013 and 2016, the BGS was commissioned by the Department of Energy and Climate Change (DECC; now the Department for Business, Energy and Industrial Strategy (BEIS)) to provide geological overviews and resource estimates for these areas.

How much shale gas do we have in the UK?

Because there is no established shale gas industry in the UK, there is no production data available, which makes estimating the size of the resource extremely difficult. Therefore, in the DECC-commissioned reports, we took a bottom-up estimation approach whereby we used available rock materials from drill cores stored in the National Geological Repository.

Many of the drill cores used for the estimates we developed were not drilled for the purpose of a shale gas resource estimate, resulting in a wide total range of volume estimates.

Shale gas exploration in the UK

The main rock formation of interest for shale gas exploration in the UK is called the Bowland Shale Formation, which occurs across a large area of central Britain. These shales were deposited in marine basins during the Visean and Namurian stages of the Carboniferous period (between 347 and 318 million years ago) when the UK was located around the equator. Carboniferous marine shales can reach thicknesses of up to 5000 m and contain enough organic matter (1–3 per cent, but locally over 10 per cent) to generate hydrocarbons.

The Bowland Shale Formation is not restricted to the onshore environment; the basins extend offshore beneath the Southern North Sea and the East Irish Sea.

Andrews (2013) estimated a total gas-in-place estimate for the Bowland Shale Formation and Hodder Mudstone Formation between 822 and 2281 trillion cubic feet (tcf). As a comparison, the total gas consumption in 2018 in the UK was 2.98 tcf. Since then, other estimates have suggested the total gas-in-place volume could be considerably less (around 140 tcf; Whitelaw et al., 2019).

Middle Carboniferous, organic-rich shales are also found in the subsurface Midland Valley of Scotland (Girvan to Greenock in the west; Dunbar to Stonehaven in the east) as part of the Strathclyde Group and the Clackmannan Group. There, the shales reach a thickness of about 3000 m, contain 2–6 percent organic carbon and are considered as a potential target for shale gas exploration. Monaghan (2014) suggested a total of 49.4–134.6 tcf gas-in-place for the Midland Valley of Scotland.

In Wales, a paucity of publicly available data currently prevents the calculation of reliable resource estimates. Potential unconventional gas resources in Wales are most likely to be found in association with coal seams or shales. In North Wales, middle Carboniferous shales include the Bowland Shale Formation, thought to be contiguous with strata in north England. Early Carboniferous shales are found in South Wales as part of the Avon Group. However, more research is needed to establish this group’s prospectivity for shale gas.

Much of Wales and central England are underlain by older Palaeozoic rocks, which may be prospective for shale gas. These successions have not been investigated extensively and no evaluation has been conducted by either the BGS or exploration companies.

Monaghan, A. 2014. [Online] The Carboniferous shales of the Midland Valley of Scotland: geology and resource estimation. (DECC website, now OGA.) 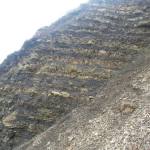 Shale gas is natural gas that is trapped within shale formations. Our role is to supply industry, government and the public with impartial geological and environmental advice in regards to shale gas in the UK.