Like many cities around the world, Hanoi has entered a new era of expansion to accommodate a rapidly increasing urban population. Under the recently approved master plan, local and regional authorities have programmed ambitious initiatives for the environmentally sustainable expansion of the metropolitan area by 2030 through the development of new road networks, new rail links, an expanded city core, five satellite urban areas and three eco-townships.

This urban growth will lead to an increased demand for natural resources, such as construction materials and groundwater. Construction materials (e.g. crushed rock and sand) are generally traded locally as high-volume and low-value products. Without an adequate understanding of the flow of these materials, from source to point of consumption, it is difficult to both plan for adequate supply and control planning for mineral extraction.

The BGS and the General Department of Geology and Minerals of Vietnam (GDGMV) have used publicly available data for a preliminary analysis and accompanying factsheet of material supply and demand in Hanoi up to 2030 for several commodities important for the construction sector. Results indicate increases in requirements ranging from a twofold increase in cement and sand to a fivefold increase in steel by 2030, based on 2016 consumption levels (Figure 1).

The close geographical link between the (past and future) demand for building materials in urban areas and the material supply in the hinterland leads to substantial land cover changes. Using satellite imagery we have observed, over the past 45 years, an increase in artificial surfaces from about 320 km2 to almost 700 km2 (Figure 2).

The urban development led by population increase is also highlighting another common issue in Asian metropolises: subsidence. This is the result of a combination of geological factors such as the occurrence of soft sediments and the drawdown of groundwater levels in the local aquifer due to the higher water demands for domestic and commercial uses.

Using the interferometric synthetic aperture radar (InSAR) technique for processing spaceborne radar data (Sentinel-1), we have identified areas that are subsiding by as much as 5 cm/yr over the period 2016–2019 (Figure 3).

The BGS and GDGMV are using the ground motion data in combination with local geology and groundwater data to develop a subsidence vulnerability map for central Hanoi. 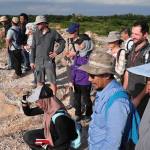