Members of the plant kingdom grow from an embryo into a multicellular organism with cellulose in their walls. They photosynthesise (employing the sun’s energy to make sugars from water and carbon dioxide) using chlorophyll (the green coloration).

The first land plants were probably relatives of the mosses, liverworts and hornworts of today (non-vascular bryophytes). Fossils of these very fragile plants are rare. The oldest known bryophytes lived on wet mudflats during the early Devonian, but it is likely that they colonised the land during the late Silurian.

Vascular plants, which emerged during the late Silurian, resemble green algae from which they evolved. Cooksonia was the first to evolve. It was a small plant (6 cm high) that lacked leaves, but had spherical spore sacs at the ends of its branched stems. A little later, Zosterophllophytina (the ancestor of the clubmosses) and Rhyniophytina (ancestral to leaf-bearing Trimerophytina and all the other vascular plants we see today) appeared.

During the Carboniferous, many new groups of plants evolved and great forests grew in the tropical swamps and deltas. Trees were not like those we know today, but mainly clubmosses and horsetails, and the earliest gymnosperms (seed-bearing plants) like conifers and seed ferns also developed. Conifers grew mainly on the high ground and are rarely fossilised, although cones are occasionally found. Seed ferns, the only major plant group to have become extinct, were usually small, but Medullosa grew to about five metres tall. 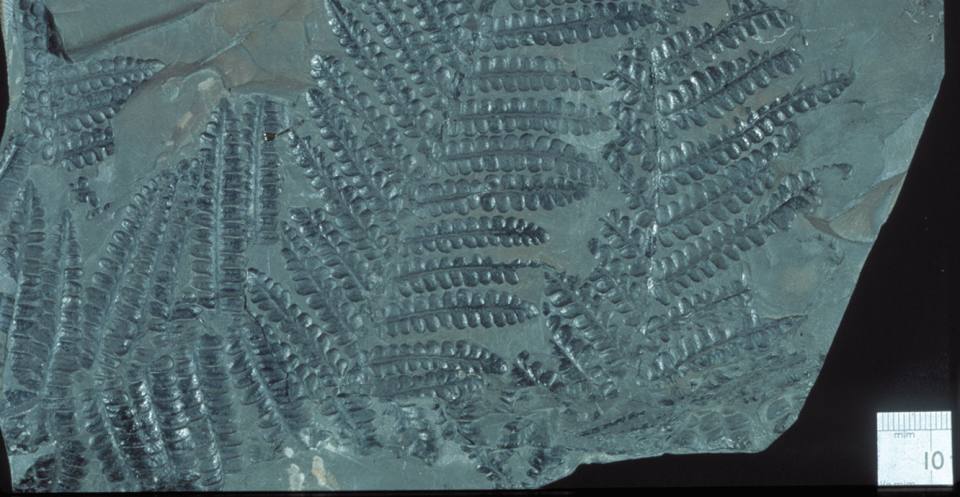 Pecopteris, a fern from the Carboniferous. BGS © UKRI. 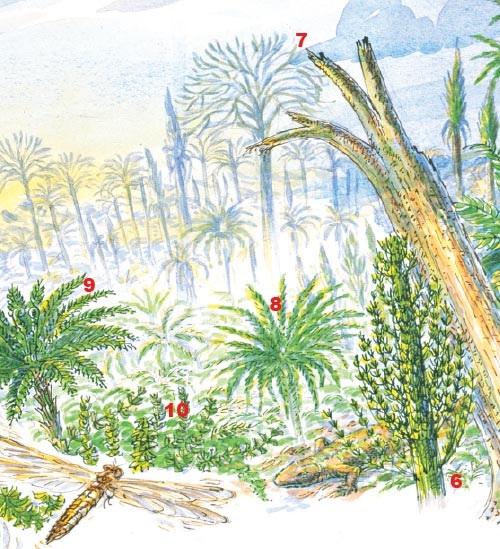 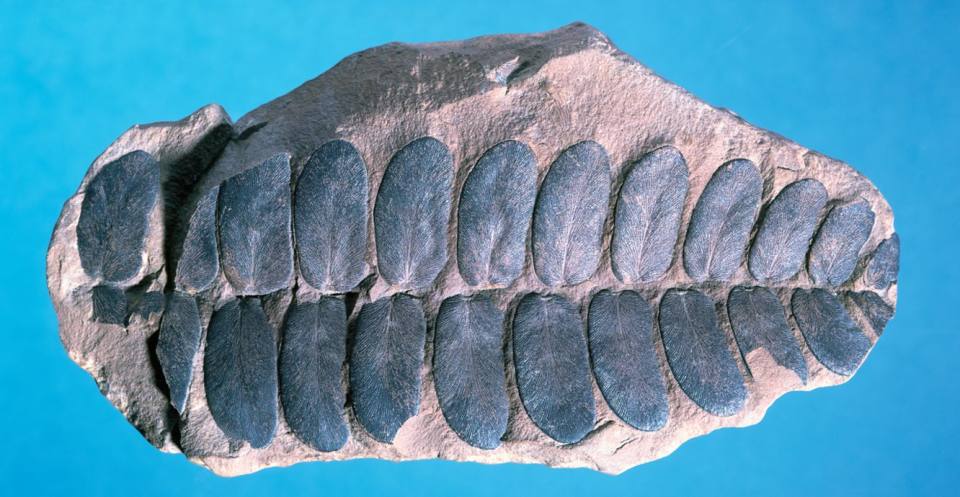 The Carboniferous seed fern Neuropteris belonged to a group of plants that became extinct in the Cretaceous. BGS © UKRI.

Gymnosperms dominated the plant kingdom during the Jurassic and Cretaceous. Conifers continued to thrive and cycads and ginkgos spread throughout the world. By the Jurassic, cycads and cycad-like plants (cycadeoids) were abundant and widespread. Some cycadeoids had what look like flowers, but these were in fact petal-like scales for seed dispersal rather than pollination. Ginkgos, or maidenhairs, grew throughout the northern hemisphere until the end of the Cretaceous, when they began to disappear, so that only a single species, in the forests of western China, is left today. 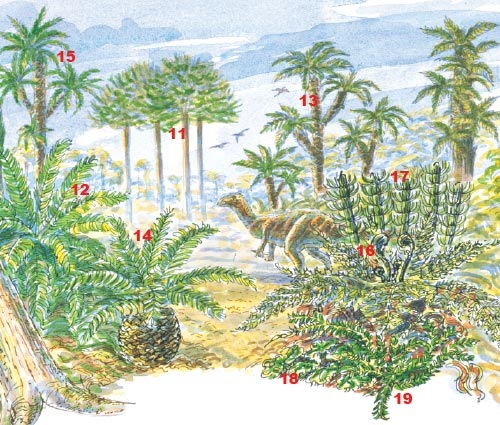 Flowering plants (angiosperms) are the most successful plants to have evolved. Of the 300 000 species of plants in the world today, about 250 000 are angiosperms. Their diversification started in tropical regions during the Cretaceous and, by the Palaeogene, they had spread globally. 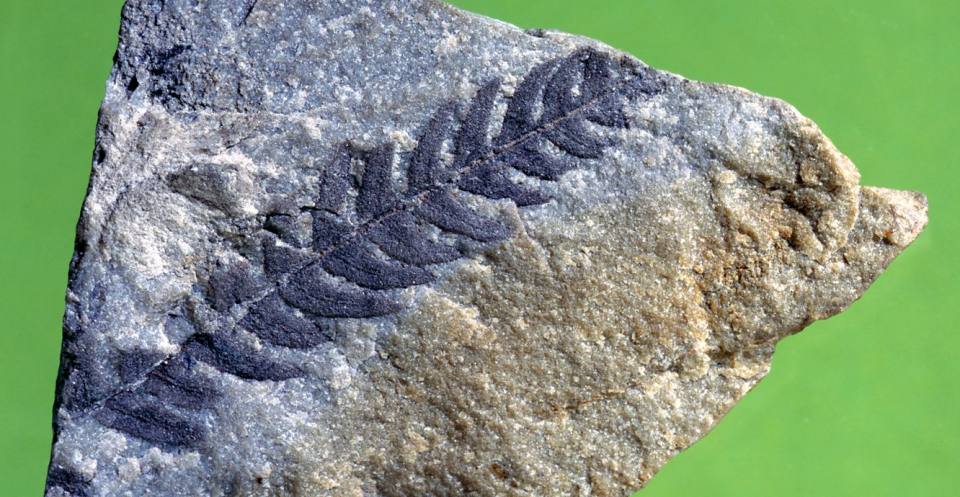 A frond of Cladophlebis, a small fern that grew amongst the large conifers and cycads in southern England during the Cretaceous. BGS © UKRI.

By about 50 million years ago, more plants were similar to those of today. The last major group of gymnosperms to evolve, the Gnetophytes, is little known and comprises only three living genera: Gnetum, Ephedra and Welwitschia. Pollen of this group has been found in Palaeogene and Cretaceous rocks, but its earlier distribution and origins are obscure. Welwitschia is an unusual plant as it lives in the Namibian desert where its only source of water is from the fog that condenses on its leaves.

Plants have grown in Britain for over 420 million years and fossils can be found with careful search. Some of the earliest plants are found in Silurian and Devonian rocks of Wales and Scotland, and many fossils are found in the Carboniferous coalfields. Jurassic and Early Cretaceous rocks of eastern and southern England may contain fossils of plants as well as the dinosaurs that ate them. Although flowers have not been found in Britain, leaves, seeds and pollen of angiosperms occur in Cretaceous and Palaeogene rocks.

Plants evolved from green algae, but there is some disagreement as to whether algae are plants or not. Some algae are formed of a single cell and are not plants, but some seaweeds, like the green algae (chlorophytes), behave like plants and some people consider them to be members of the plant kingdom. However, algae do not develop from an embryo and many scientists regard them as being part of the protoctista kingdom.

We tend to think of fungi, such as mushrooms and toadstools, as being plants — but they are not. They neither grow from embryos nor photosynthesise and are put in a separate kingdom.

About 150 million years ago, during the late Jurassic, large cycads grew in Dorset. These were buried beneath sediment and eventually fossilised, but some of the tree stumps are now exposed again. Weathering has hollowed out the central part of the trunk to form bowl shapes up to 1 m in diameter. These cycads were thought of as fossil crows’ nests for many years.

For many years, the roots and stems of Carboniferous club mosses (Stigmaria) were thought to be fossil serpents or fish. Fossil tree stumps and Stigmaria can be seen in their position of growth in Fossil Grove, Glasgow.

Many of the fossils in the BGS palaeontology collections are available to view and download as 3D models. Click on the caption to view this fossil as a 3D model or go to the GB3D Type Fossils website for further information.