The belemnites became extinct at the end of the Cretaceous Period, at roughly the same time as the dinosaurs disappeared. However, we know a lot about them because they are commonly found as fossils, formed when the remains of traces of the animal became buried by sediments that later solidified into rock.

Belemnites were marine animals belonging to the phylum Mollusca and the class Cephalopoda. Their closest living relatives are squid and cuttlefish.They h ad a squid-like body but, unlike modern squid, they had a hard internal skeleton.

In the animal’s tail, the skeleton formed a bullet-shaped feature sometimes referred to as a guard, but more correctly termed a rostrum (plural: rostra). These are the parts that are normally found as fossils.

The rostrum probably acted as a counterbalance to the head and tentacles (or arms) during swimming.

The rostrum is composed of fibrous calcite crystals arranged at right-angles to the surface. There may also be a concentric pattern, like the growth-rings of a tree trunk; the paler layers are composed of nearly pure calcite but the darker layers are discoloured by the presence of organic matter. These ‘rings’ represent the growth of the animal, probably over a period of months.

As well as the rostrum, strongly curved, sharp hooks made of chitin are sometimes preserved as fossils. These hooks were attached to the belemnite’s tentacles and were probably used for grasping and holding prey such as other molluscs, small fish and crustaceans. Larger hooks may have been used in mating.

Belemnites had 10 tentacles, each equipped with 30–50 pairs of hooks.

As with all animals, belemnite soft parts decayed easily and are therefore rarely found as fossils. However, there are some examples from the Jurassic rocks of southern England and southern Germany in which soft parts, including ink sacs similar to those of octopus and other living cephalopods, are fossilised.

As with living animals, belemnites are classified into species and genera (singlular: genus) whose names must be Latin words or words that have been ‘Latinised’. The proper scientific name of any particular belemnite consists of the name of the species, preceded by the name of the genus to which it belongs, plus the name of the first person to describe it and the date of that description.

Many belemnite genera have names ending in -teuthis; this is the Ancient Greek word for squid.

The largest belemnite rostrum known comes from Indonesia. It is about 46 cm long; the animal itself must have been 4-5 m long.

One of the smallest belemnites (genus Neohibolites) is well known in the Cretaceous rocks of England. Neohibolites minimus has a rostrum only about three centimetres long. 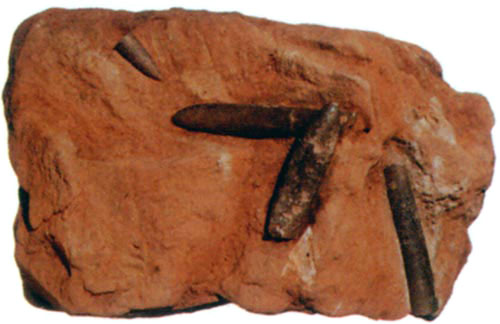 Belemnites can be useful tools for the geologist. The robust composition of their rostra means that they often survive where other fossils are destroyed. For instance, many fossils are found in sedimentary rocks, but belemnites may also be preserved in metamorphic rocks. In this respect, they are superior to the contemporary ammonites,which are the primary guide fossils for Jurassic and Cretaceous stratigraphy and correlation.

In the earliest Jurassic, belemnites were restricted to the European area but from then onwards, they had a worldwide distribution and they can potentially be used for correlation on a global scale. However, as with ammonites, this can be hampered by ‘faunal provincialism’. This is where certain groups of livings things are confined to certain areas.

Where rocks contain many belemnites, it is common to find them aligned in a particular orientation; this indicates the direction of current prevalent during the deposition of the original sediment on the sea floor (otherwise known as the palaeocurrent).

Belemnites have also been used to tell geologists something about the climate during the Jurassic and Cretaceous periods. By measuring the oxygen isotope ratios of the calcite in the belemnite rostrum in the laboratory, geologists can estimate the temperature of the sea water in which the belemnite lived (otherwise known as the palaeotemperature). Belemnites were one of the first fossil groups to be used in this way because their rostra were thought to be resistant to chemical change during diagenesis (the transformation of a sediment into rock).

Although the number of protons and electrons in oxygen atoms is always the same (eight each), the number of neutrons can be eight, nine or ten. These three differently composed atoms are called oxygen isotopes and are called 16O, 17O and 18O. On average, the 16O to 18O ratio in today’s oceans is about 500:1 but it is highly sensitive to temperature. Consequently, if the oxygen isotope ratio present in the calcium carbonate of a shell is known, an indication of the ocean temperature in which it lived can be obtained.

Late Cretaceous belemnites (genera Belemnella, Belemnitella and Gonioteuthis) are used as stratigraphical markers in Campanian and Maastrichtian rocks, where species of these genera give their names to subdivisions known as zones.

In Cenomanian rocks, a species of belemnite gives its name to the unit known as the Plenus Marls (formerly the Belemnite Beds). This unit forms a widespread marker in the Chalk Group throughout southern and eastern England, northern France and beneath the southern North Sea, and is important for correlation.

Belemnites also give their name to 20-plus metres of Jurassic rocks on the coast of Dorset. These are the Belemnite Marls, of Pliensbachian age, which can be seen in the cliffs near Charmouth. Belemnites are the best preserved fossils in this interval, and include the genera Angeloteuthis, Bairstowius, Hastites, Passaloteuthis and Pseudohastites.

Belemnites take their name from the Greek word belemnon meaning dart or javelin. The fossilised rostra were widely believed to have been flung down as darts from heaven during thunderstorms (thunderbolts). Some have a finger-like shape (e.g. Dactyloteuthis—from the Greek word daktylos meaning finger) and, in folklore, they have been called Devil’s Fingers and St Peter’s Fingers.

As with other fossils, belemnites have been thought to have medicinal powers. These varied from region to region, but included remedies for rheumatism and sore eyes, and a cure for intestinal stones in horses.

Belemnite rostra have often been referred to as ‘fossil bullets’ because of their pointed, conical shape. Perhaps because of this, mass accumulations of rostra are called ‘belemnite battlefields’. Some of these are thought to be the result of mass death after mating. This phenomenon is common in living squid, which migrate to an ancestral spawning ground to mate — the culmination of their lives — and then die.