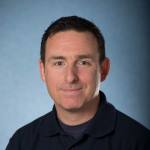 I manage the Biostratigraphical, UKCS teaching cores, Minerology and Petrology collections that are stored in the George Bruce building. I curate, database and deal with all enquiries from loans to requests for lab bookings to view specimens. I used to manage the BGS Scottish hydrocarbon core which was stored in Edinburgh until it’s recent relocation to keyworth, we held back a small number of cores for teaching purposes.

I previously managed the BGS UKCS hydrocarbon core which was stored in Edinburgh, curating new material and laying out core for visitors. I deputised in the management of a team for 20 months to photograph and relocate the UKCS samples which involved over 175,000 boxes of core and cuttings from Edinburgh to keyworth. I also managed a team over a 7 month period relocating the remaining samples and records held in our Edinburgh office to the Lyell Centre. 15,000 trays were scanned for radioactivity, they also given a conditional survey and were databased which provided us with a full inventory of our holdings.