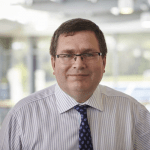 He has worked extensively in establishing new educational and research collaborations in the Middle East, Africa, Singapore, Malaysia and China. He is a visiting professor at the Chinese Academy of Sciences (Beijing); Tianjin University of Finance and Economics, and at Southeast University (Nanjing). He is a trustee of the Carnegie Trust for the Universities of Scotland; an advisory board member of the Lloyds Register Foundation; Lloyds Register 100A1 Ambassador; a member of the Converge Challenge Strategic Advisory Board, and chair of the Scottish Institute for Enterprise.