We have placed some geologically significant plants into the Geological Walk at BGS Keyworth to illustrate the fascinating evolution of the terrestrial flora. A total of eight plants with long geological records (‘living fossils’) have been selected and planted in the appropriate, ascending, stratigraphical order.

The first primitive land plants evolved from aquatic green algae close to the Cambrian–Ordovician transition, around 485 million years ago (Ma). These were non-vascular bryophytes, i.e. hornworts, liverworts and mosses. Bryophytes must live in damp or wet environments because their tissues cannot conduct water.

Plant life on the land diversified significantly during the Silurian (about 440–420 Ma) and the first vascular plants emerged. Vascular plants are those with specialised tissues for conducting water and nutrients throughout the plant. Relatively rapid plant colonisation and evolution, together with significantly increasing diversity, continued into the Devonian (about 420–360 Ma) and most recognisable plant features were established by the Middle Devonian (about 395–380 Ma). For example, novel features that evolved during the Devonian include leaves, true roots, seeds and wood. The first genuine forests appeared by the late Devonian.

The two most important post-Devonian evolutionary milestones in land plants were the inception of flowering plants in the Cretaceous (about 140 Ma) and the rapid radiation of the grasses in the Miocene (about 16–12 Ma).

Horsetails, also known as mare’s tail or scouring rush, are represented today by the genus Equisetum. The plant family that includes Equisetum, the Equisetaceae, is classified alongside the ferns (Site 2) and comprises primitive, vascular plants that reproduce using spores rather than seeds.

Horsetails are perennial herbs with conspicuous joints and, superficially, they resemble rushes. They exhibit hollow, jointed and ridged stems and their leaves are sheaths that encircle the shoots. The most well-known species is the common horsetail, Equisetum arvense, which grows along river banks and in low-lying fields and is about 30 cm high.

The spacing pattern of nodes in horsetails, specifically where the ones nearest the apex of the shoot are increasingly closely spaced, inspired the famous Scottish mathematician John Napier (1550–1617) to develop the concept of logarithms.

Horsetails and their close relatives are very long-lived and can be traced back as far as the Middle Devonian. Their peak in terms of abundance and species richness was during the Carboniferous (about 359–300 Ma), when they were one of the most common elements of the vast palaeotropical swamp forest ecosystem known as the coal forests. The Palaeozoic forebears of modern Equisetum, such as the genus Calamites, dominated the understorey of these swampy forests, which eventually produced most of the world’s coal reserves. Some of them were large trees that grew to around 30 m tall.

The majority of ferns belong to the subclass Polypodiidae, which is very diverse with around 12 000 species. These are termed the leptosporangiate ferns. Ferns are relatively primitive, vascular plants that reproduce using spores and have neither seeds nor flowers. Many ferns have rhizomes, which are stems that extend horizontally at or immediately beneath the surface, whilst some have upright stems.

The leaves are termed fronds, which have a soft growing tip rolled up in the centre of the curved, distal part and is called a crozier or fiddlehead. The crozier is produced by growth and unfolding, hence frond development is initiated at the distal tip.

Each fern frond has a blade, which is the expanded ‘leafy’ part. Each blade comprises many pinnae or leaflets, which may in turn have many pinnules or subleaflets.

The earliest known fossils of leptosporangiate ferns have been found in rocks of earliest Carboniferous age (about 350 Ma). These diversified and became very common in the late Carboniferous coal swamps.

Conifers are a division of the gymnosperms (‘naked seeds’). They are cone-bearing, wind-pollinated seed plants and comprise the plant division Pinophyta.

Living conifers are mostly evergreen, perennial trees with a single, straight trunk and side branches; they include cedars, firs and pines. Many of them bear dark green, needle-like leaves and produce aromatic resin to protect the tree against the infection of wounds and infestation by insects. If it becomes fossilised, the resin is transformed into amber.

The number of extant conifer species is relatively small, but they are extremely important ecologically. They dominate certain biomes, notably the taiga of the northern hemisphere and mountainous terrains further south. With their tolerance of dark winter light regimes, freeze-resistant physiology and conical shape to shed snow, Arctic or boreal conifers are well adapted to living in high northerly latitudes.

The earliest conifers emerged during the late Carboniferous (320–300 Ma); we think that they first developed in dry, upland environments. The climate became more arid during the early Permian and conifers diversified and migrated into other settings, especially lowland sites.

The conifers are very hardy and robust plants and were relatively unaffected by the end-Permian mass extinction (about 252 Ma). They subsequently became the dominant land plants in the Mesozoic. Specifically, conifers diversified substantially during the late Triassic and the Jurassic (about 237–145 Ma) but declined markedly in the late Cretaceous (about 100–66 Ma), probably due to intense competition from the flowering plants, which were rapidly expanding at this time, especially in the lowlands.

Ginkgo biloba, also known as the maidenhair tree, is the only living species of the order Ginkgoales. The closest living relatives of this order are the cycads (Site 4). This coniferous, deciduous, long-lived species of tree is native to China but has been exported and cultivated all over the world.

The species prefers disturbed, riverside settings. Ginkgos are large trees, which usually attain a height of 20–30 m. They have angular crowns and long, somewhat spindly branches. The crown becomes markedly wider upon maturity as the tree ages. Ginkgos have the male and female reproductive structures on separate plants, i.e. they are dioecious. The male plants produce small cones; by contrast, the female plants are characterised by the development of two ovules at the end of a stalk. Following pollination, one or both of the ovules develop into seeds.

The order Ginkgoales (ginkgos in the broad sense) has a long geological history. The oldest specimens known are from the early Permian (around 295 Ma). Fossil specimens undoubtedly of the genus Ginkgo first appeared during the Middle Jurassic (about 174–164 Ma). They diversified and migrated throughout the supercontinent Laurasia during the late Jurassic and early Cretaceous about 163–100 Ma).

Together with the cycads and ferns (Site 2), ginkgos declined substantially during the Late Cretaceous (about 100–66 Ma). At this time, the flowering plants were rapidly burgeoning and their rise seemed to have suppressed many of the less-evolved plants such as the ginkgos. This phenomenon peaked by the latest Pliocene (about 2.7 Ma), by which time ginkgos became extinct everywhere except in a relatively small region of central China, where they remain native today.

Cycads, representatives of the gymnosperm order Cycadales, are coniferous seed plants with stout, cylindrical trunks and prominent crowns of very large, pinnate (feather-like) evergreen leaves. The trunks normally do not branch and may be buried, so the leaves appear to emerge from the ground.

The cycads have a long geological record; the most recent common ancestors of the living cycads are of Permian age (around 299–252 Ma). The Mesozoic, particularly the Triassic and Jurassic (around 252–145 Ma), was the acme of the cycads. Together with the conifers (Site 2) and the Ginkgoales (Site 3), cycads dominated Mesozoic forests worldwide.

The perception that extant cycads are ‘living fossils’ is not wholly accurate. The lineage is indeed venerable, however, most extant species evolved since the middle Miocene, i.e. during the last 12 million years.

The scientific name of monkey puzzle trees, also known as the Chilean pine, is Araucaria araucana. They are coniferous, evergreen trees currently native to South America, growing on the lower slopes of the Andes in Argentina and Chile.

The juvenile trees are conical or pyramidal and, as they mature, the distinctive ‘umbrella’ style develops. They grow up to 40 m in height and the leaves are extremely distinctive; they have sharp edges and tips and are thick, tough and scale-like. The bark is similarly robust and thick. The monkey puzzle is wind-pollinated; the large male cones produce prodigious numbers of distinctive pollen grains.

The origin of the popular name is the prominent English lawyer Charles Austin (1799–1874). When he first saw a specimen of Araucaria araucana, he commented that it would puzzle a monkey to climb it!

The ancestors of Araucaria araucana, representatives of the family Araucariaceae, can be traced back into the Mesozoic Era. There are some Upper Triassic (around 237–201 Ma) records, but unequivocal araucarian macrofossils and pollen grains are abundant in the Jurassic and Cretaceous (about 201–66 Ma) and are global in distribution. However, by the early Paleogene, the family Araucariaceae was in decline and eventually it became restricted to the southern hemisphere.

Magnolia is a primitive (in an evolutionary sense) genus of both evergreen and deciduous, angiospermous (flowering) shrubs or trees. It is characterised by large, pleasant-smelling, ‘showy’ flowers that are white or sometimes brightly coloured. Magnolia was named for the 17th century French biologist Pierre Magnol and they are native to South-east Asia and the Americas. There are around 200 living species.

Magnolias have a long geological history and the early representatives evolved robust carpels (the ovule-bearing structure) so that these delicate, reproductive parts of the flower would not be damaged by pollinating beetles. There is a good fossil record of magnolias back into the early Miocene (about 20 Ma), but the earliest forms, which are substantially rarer, are from the early Cretaceous (about 110 Ma).

The grass family, or Poaceae, is a very large subdivision of the plants. In terms of diversity, it is the fifth-largest family, with nearly 800 genera and around 10 000 species.

Grasses are characterised by elongate, hollow stems and the leaves are adapted to grow from the base of the blade, in order to survive grazing (and mowing). They are angiospermous and monocotyledonous, that is, their seeds normally have only one embryonic leaf, or cotyledon. The group includes bamboos and cereals in addition to natural and cultivated grasses.

The Poaceae are, of course, extremely ecologically successful and therefore are virtually ubiquitous. To underline the importance of the Poaceae, grassland biomes such as prairie and savanna constitute about 40 per cent of the land area of the non-polar regions of our planet.

The economic importance of grasses is absolutely immense because cereals produce staple foodstuffs for humans and domestic animals. Grass is also used by the building industry, for example as thatch, and for producing biofuels.

Until recently, it was thought that the inception of the grasses was in the early Eocene, around 55 Ma. However, new research from China and India has pushed grass evolution back into the early Cretaceous, possibly as early as about 128 Ma. That said, the early fossil record of the grasses is sparse until the middle Miocene (about 16–12 Ma), when the Poaceae underwent substantial diversification and ecological expansion. 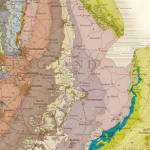 As the national geological survey, we are the UK’s premier provider of objective and authoritative scientific data, information and knowledge to help society understand our Earth.